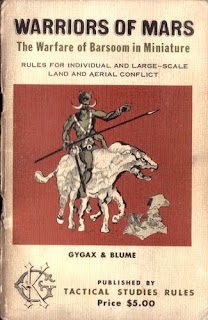 Last week, a guy at work asked me if I had ever read any of the Edgar Rice Burroughs Mars novels, of which I had, and that has since derailed my brain from other topics to that of Barsoom. And when my flights of fancy turn in that direction, I do two things; 1: reread a ERB Mars novel, usually "A Princess of Mars" and 2: Bust out my copy of "Warriors of Mars" and flip through it.

"Warriors of Mars" was a miniatures rules set put out by the then fledgling game company, TSR, in 1974, written by Gary Gygax and Brian Blume. It was intended to act as a ruleset to fight out battles set on Burrough's Barsoom., complete with radium rifles, flyers and white apes. The only problem with this ruleset was that TSR had no permission from the Burroughs estate to produce it, and even though they were a small company at the time, the game did not go unnoticed. A cease and desist order came to TSR's mailbox, and they pulled the game from distribution quickly after it's release.

I, in fact, had never even heard of the game until I saw it in the used section of a game store some years ago, priced at $20, which was a steal if you've tried looking for a copy of this game on E-bay. I saw the name "Gygax" on the cover, and it was a surefire buy for me. With no creases, writing or even staple rust, this booklet is the prize of my gaming collection.

"Warriors of Mars" is a 56 page booklet produced in the style of the original Dungeons & Dragons booklets, and even shares the same artist, Greg Bell, for the cover and interior artwork. Though it bears such similarity to the D&D booklets, it was not intended to be a roleplaying game but a mass battles game. And for the majority of the time I have owned it, I looked at it that way.

But it always helps when you actually READ something instead of just flip through looking at the pictures (which have a lot of character, by the way). The mass battle system is very simple and not hard to grasp, even with the addition of Martian airships in the mix, but then you have the rules for 1:1 skirmishes. Here are things that look familiar; there is a level system for individual warriors, where warriors take hits equal to their level +1. There is an experience chart for increasing levels, and experience rewards for defeating foes, rescuing princesses, capturing airships and finding lost treasures. You have movement rates for crossing the dead sea bottoms and encounter charts for what you find (or what finds you!). In essence, there is a little proto rpg hidden in this game.

Sure, the characters are just defined by their name, level number and experience points, (there are no other stats, except maybe their movement score) and the booklet is sparse about details on Barsoom, (Here the referee is directed to reread his ERB novels for details and inspiration) but you have a very playable little game. Referees are even advised to purchase the then new Dungeons & Dragons game for more information on how to run games in the black pits below ancient Martian cities.

Gary Gygax was an immense fan of Burroughs, and his enthusiasm for the subject matter comes through in his writing here. "Warriors of Mars" is an wonderful little nugget of old-school goodness that, if you can find one, should not be overlooked. Kaor!
Posted by Unknown at 8:40 PM