That time of year has rolled around once again; time for Gamicon in Iowa City, which is happening the 11th thru the 13th of February down at the Iowa Student Union. This year, I'll be running three events spread over Saturday and Sunday.

First up, unsurprisingly, is Labyrith Lord, which I always have a good time running. Old school dungeoneering at it's finest!

Next up, Steve Kenson's ICONS, which I've only gotten to play a couple of times but is a hoot! We'll even be rolling up random superhero characters, which ought to ratchet up the fun level! Wham!

Last, but not least, Federation Commander! I've not run a tactical starship battle game at this con before, but I did play it there last year and am looking forward to a larger group of players! This year we battle the Doomsday Machine!
Posted by Unknown at 2:50 PM 141 comments: 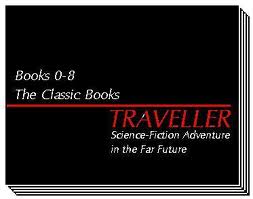 Having received a gift card for Half Price Books for Christmas from my in-laws,  I stopped in today to see if there were any treasures to find.

Looking over the rpg books, I see the usual array of Everquest RPG tomes, the moldering stacks of old Dragon mags and the usual assortment of old Warhammer roster books, when I spied a pair of the Classic Traveller Reprint series of books.

Then I looked a shelf down, to see four more of them.  All in all, they had volumes 2-7.

Needless to say, Happy New Year to me!
Posted by Unknown at 3:20 PM 78 comments: 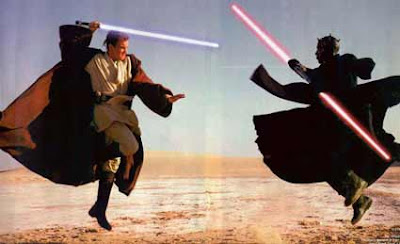 Today finished up the Thanksgiving Holiday season for us.  We were at my brother's house, eating waaaay too much and, of course, playing boardgames.
Today I decided to bring Star Wars Epic Duels, which my wife got for me at our garage sale last summer, still in shrinkwrap, for nothing or next to nothing.  (SCORE!)  I'd seen a lot of chatter around this game on BoardgameGeek, and had read some recent blog posts about it, but had never played it.
My nephew, Austin, my brother, Al and I set up.  Austin had Darth Vader and his Stormtrooper lackeys, I had the Emperor and the Royal Guard, and Al fielded Obi-Wan and a pair of clones on the Geonosis Arena board.  The fracas got hot immediately, with everyone using the "close and hose" strategy, even though nobody had really drawn a lot of cards yet.  My Guards went out immediately, and then Vader and Obi-Wan started concentrating on each other while the Emperor withdrew to the shadows, building up his hand of cards.  Finally, after Vader and Kenobi had whittled each other down to naught, I swept in with Palpatine and Force Lightninged the lot of the them.  End Game 1.
However, we had just gotten the hang of this game, and so we moved onto the Kamino Landing Platform board, with Austin bringing Master Yoda and his Clones, Al with Han Solo and Chewbacca, and myself with Mace Windu and his Clones.  I immediately became hemmed into a corner on this board, which rendered a lot of Mace's movement cards non-effective.  This game engendered a lot more give and take, as we had all learned from the last game to try to be a little more tactical.  The clone troopers had a very short lifespan in this session, but in the end both Yoda and Mace fell victim to Han Solo's deadly rain of blaster fire.  End Game 2.
This game definitely deserves the hype it seems to get on the 'Geek.  Even though the mechanics are dirt simple, there is enough variety in the different decks to really make the combats interesting.  I suspected the maps were too small for 3 players, but that really did not seem to hurt the game at all.  Overall, I am very impressed with it and will have to bust it out far more often.
Posted by Unknown at 7:13 PM 67 comments:

Into the Belly of the Beast

Now, I know that with some of you, this will ruin some of my old-school cred.  But hear me out.

The group that I play with and I have been together going on 6 years now, and we've all become very good friends from mere acquaintances.  I think the world of these people; otherwise I don't think I would have hung around so long.  We play together on a weeknight, which right now is on Thursdays.  We've played lots of different games and different systems, but rarely D&D.

Most of my group had been playing D&D 4th on a different night for about 2 years, and they were antsy to get back to it.  I had the books in a pile since they came out, but had never touched them.  All the Essentials talk out there got me curious, so I decided to suggest we play 4th ed, which was heartily agreed to by everyone.

I'd heard a lot of nasty things about 4th on the blogosphere, but my group loves it.  And they are pretty smart people; most much smarter than me.  So, I figured there had to be something in this game that was worth playing.

I was right.  4th, despite the errata and confusion with Essentials and all, is a pretty good game.  Is it my "favorite" D&D?  No, probably not, but then it doesn't play like that game either.  It's its own beast, and after three really fun sessions, I'm seeing the appeal of it.  Will it destroy my love of the old school?  Undoubtedly not, but it will get me interested in seeing what can be ported in from that style of play into this one.

Despite the edition, adventure awaits!
Posted by Unknown at 9:50 PM 71 comments: 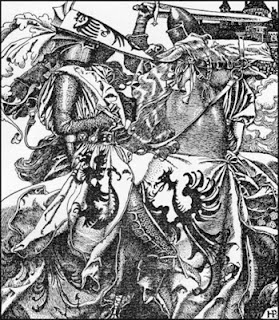 These are some rules I use to help low-level player characters to survive a little longer, and also to help soak up some of that treasure that they are always carting around.
Players buy armor for their characters at character creation and then to upgrade it, but you never see them buying replacement armor or paying upkeep for what they have.  Instead of coming up with a rule to reflect upkeep and maintenance costs, I thought to adapt the “Shields be Splintered” rule I've seen on various blogs and in old-school publications, though I've expanded it to cover all armor.
The same is true for weapon maintenance, and so I've tacked on a rule to allow weapons to fill the same role as well.
Sacrificing Shields & Armor
After a hit has been declared on a character by a melee attack, the player may decide to take the damage to his shield or armor instead of his hit points.  This must be declared before damage is rolled, so the hit might be for 10 points or only 1, but will still have the same effect on shields and armor.
A wooden shield so struck is destroyed (all shields are assumed to be wooden unless specially purchased otherwise), while a metal shield is useless until repaired and counts as double encumbrance to carry around.  Metal shields also have other benefits (see below).
Armor so struck is reduced in effectiveness by 2 AC ranks. (Leather Armor of AC 8 is rendered useless, Chain is reduced to AC7, and so forth) Armor so damaged counts as double encumbrance and imposes a -2 to all attack throws by the wearer until removed or repaired.  Armor that still has a AC below 9 may take yet another hit, but then is rendered completely useless and cannot be repaired or worn effectively.
Missiles, Magical attacks and Breath Weapons are not affected by this rule.
A metal shield, however, may be used to halve damage from a breath weapon (except chlorine gas or lightning).  This can be declared after a successful Save vs. Dragon Breath, and halves damage yet again.  However, the shield is rendered useless afterwards.  This defense may also be used against Fireball spells, but not against Lightning bolts.
Weapon Breakage
If a character has elected to use the Parry option (see Advanced Editon Companion or Holmes Basic) to defend themselves, the player may elect to take a successful hit on his weapon.  This breaks the weapon, rendering it useless until repaired or replaced.  Magical weapons may take hits equal to their bonus without breaking, but are then rendered completely non-magical and will break on the next hit absorbed.
Posted by Unknown at 7:37 PM 61 comments: I don't know what's in the water in the OSR blogging community, but module B2: The Keep on the Borderlands is having a strong showing this weekend.
First thing I came across today was Jeff Sparks' video blog, which is about the module, and why he's using it for his Labyrinth Lord game.  Then, I find B/X Blackrazor's accounts of his players adventures in the Caves of Chaos, which are just priceless.
Anyone who knows me knows I am highly suggestible.  So, who's up for cave crawling??
Posted by Unknown at 9:21 PM 61 comments: 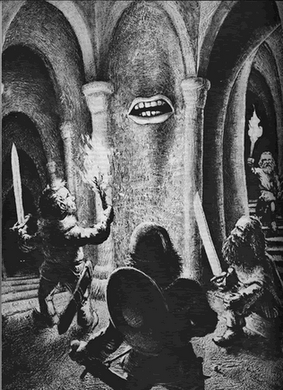 James Maliszewski on Grognardia posted a question yesterday: What image sums up D&D for you?  Telecanter had this image posted on his blog, and I am in complete agreement with him.  I, too, spent a lot of time looking at the PHB when I was young, and I was always drawn to this image.  It may have been for the reasons Telecanter cites, but I think it reminded me of The Hobbit, with Bilbo and the Dwarves descending to find Smaug's treasure.  Maybe Thorin's fathers had placed a magic mouth in the secret tunnel to guide anyone going that way.
I also notice that this image has influenced me more than I thought, because nearly all of my dungeon drawings seem to resemble this image in terms of lighting and architecture.   Weird how something like that sinks into the back of your brain and just stays there.
Posted by Unknown at 11:16 AM 42 comments: